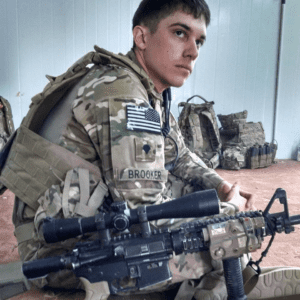 “You will never be able to achieve anything truly great if you spend all of your time playing video games.”

Hi, I’m Adam. At the time of writing this, I am 24 years old and I am a Sergeant in the US Army. My MOS is 11B (Infantry) which is probably what you think of if you ever hear someone say they are in the military. I’m the guy who thought it would be a good idea to go on patrols and try to find people to shoot at me so that I can shoot back at them. I am currently in the 82nd Airborne Division so my job, being an Infantryman, is literally to jump out of an airplane behind enemy lines and kill everyone that isn’t wearing the same uniform as me. So kind of like Call of Duty in real life, except a lot less action and a lot more waiting around, sitting in a hole, watching it fill up with rain, eating meals that are supposed to last for a century, and learning how difficult it is for a person to actually freeze to death. I did a tour in Iraq in 2015. The weather was hot, like boot melting hot (~125 degrees fahrenheit) on top of all of our gear which made for some new and unique smells. The people were nice for the most part, except for the crazy ones who would drive around vehicles filled with a thousand pounds of explosives and try to vaporize us. The local food was actually pretty good though.

Video games were my life.

Let me tell you, I most definitely know about video games.  If I had to write a resume for being a gamer it would be something like this: I started by playing neopets when I was in 5th grade. I never really made it too far in that one because soon after, I started playing Runescape. I got to combat level 98 on top of my various trade skills which as you well know took hundreds if not thousands of hours of playtime to achieve. Quite an accomplishment if I do say so myself, but it gets even better because next up is…you guessed it, World of Warcraft. Ah yes, this is where I truly shine. Over the course of 5 years I probably racked up about 400 days of solid play time. Not like I played 400 separate days. I mean about 10,000 hours of play time. And of course there was some Call of Duty mixed in on my Xbox 360, gotta keep the variety up. I was so dedicated that I really didn’t have much of a social life in high school as my friends all also played videogames for the most part. Whenever we would hang out and have a sleepover or something, we would all bring our gaming systems and play together.

More time to game in college.

When I went to college, it freed up even more time for me to game. I will admit, the first semester was a little bump in the path as I actually focused on my classes some and finished with decent grades. But this meant that my gaming performance was sliding a little bit, perhaps I shouldn’t have chosen Engineering at NC State. I learned from my mistake and devoted so much time to gaming my second semester that I just stopped going to two of my classes leaving me with only two other classes to worry about. I entered the euphoric gaming trance which some of the normal people refer to as “depression” and was so committed to gaming that I didn’t go to class for a week straight one time. Naturally, I barely passed the two classes but my gaming performance was top notch.

After that second semester I realized that I was destroying my life and I decided to join the Army. I’m not exactly sure what happened. Maybe it was just a mix of the thing with college and being away from all my games for 14 weeks when I was at basic training, but I just changed.

I wish I had all my gaming hours back.

Now, I don’t even really have time for video games and, honestly, I don’t even notice. I am currently involved in three business ventures on top of my long days in the Army. Whenever I do have free time that could be spent gaming, I would much rather read books on leadership and personal development.

Basically I have stopped spending all of my free time on video games and have been investing that time in my future. It feels great!  I am nearing the end of my five-year commitment with the Army and am looking forward to going back to NC State University. Instead of looking forward to all of the free time I will have to play games, I am actually excited to go back to learn and meet new people. If you are a gamer, I’m sure many of you at some point have wished you could get all of the hours you have spent gaming back, and use them for something else. I know I have.

Today, many kids just want to sit inside and waste their childhood playing video games. You know how it is, childhood is wasted on the young and all; but now, childhood is wasted on the video games. The young don’t even get a childhood anymore. Video games have advanced so quickly, and are so prevalent, that kids are as deep as I was when I was in college and they haven’t even hit double digits yet. If you are a parent, never forget that you are the parent and your kids are kids. You do not need their approval for your actions and you have to think about the long term because until they progress a bit into adulthood, they literally can not do it for themselves and the videogames hinder their decision making even further.

The choice is yours, change is possible.

There is no Universal Law that says that you have to be the same person you were yesterday. You can continue down the path you are on and live a life full of regret and mediocrity, or you can decide to pursue your dreams that you have pushed to the side in order to make room for gaming.

You have the power to make something of yourself and change the world around you, but you will never be able to achieve anything truly great if you spend all of your time on games. The choice is yours. No one else can make it for you.

Learn more about Adam’s story by watching his YouTube videos.

How to Reconnect Our Digitally Distracted Kids
August 22, 2017

The New Face of Addiction: Ten Signs Someone you Love is Addicted
June 10, 2017